We’ve all seen that meme, you know, the one where the baby is eyed-shut, blissfully lathering oodles of spaghetti noodles on his head, and you can’t help but sympathize with his affliction. Have you ever met someone who disliked noodles? This month, we slurp and twirl with gusto as we join in celebrating the egg and flour creation found across the board in nearly every cuisine in the world. No, this is not a joke. March is national noodle month and to celebrate you should treat yourself to these new noodle dishes that are already developing cult followings around the county.

When one thinks of noodles, inevitably ramen comes to mind. And if you know the basic economics of supply and demand, and have ever paid $25 for a bowl of ramen at any of the Momi establishments, then it should be of no news to you that this Japanese staple is scarce in our city. However, there’s one particular noodle dish being served at their new dumpling-centric outpost that has got us in tears, literally. The fresh wasabi and scallion ramen noodles are not for the faint of heart; in fact, when you order the green, grainy coated pasta, the chef will personally come out to the table to make sure you know what you’re getting into. It’s the kind of dish that will clear your sinuses and induce tears with every bite, and yet it is so delightfully addictive in its bold simplicity.

If you’re looking for the better deal to satiate your noodle pangs, thank your lucky stars chef Jeremiah found a nook in Wynwood to keep his trend-setting kitchen container permanently open, thanks in part to the success of his Art Basel pop-up, Noodle Head. Although the menu caters mostly to the original food truck’s very popular repertoire, from time to time it still offers the noodle creations that briefly left an impact, including the spaghetti carbonara, kale pesto torchio and brisket ragu rigatoni. However, and speaking of ramen, it is the chefs inventive take on the popular dish, which he crafts with alkaline noodles tossed in XO sauce, with sprinkled kimchi, country ham and an array or seasonings and extra toppings of your choosing. Atop the melange sits a beautifully soft cooked egg, which will bring the nested labor of love together the minute you pop that yolk. Did we mention it was only 9 dollars?

When the old Copperbox spot on the North Miami strip of the Midtown corridor acquired new stenciling on the walls that read “Proof Pizza and Pasta,” our initial reaction was “great another underwhelming, overpriced pizza joint.” But boy, were we wrong. The “anti high end Italian” dreamchild of former executive sous-chef at Michael Mina’s Bourbon Steak, Justin Flit, has become a local overnight sensation for its grade 00 secret dough recipe and 900-degree wood-burning  oven cooked Neapolitan pizzas. But there’s one menu item that’s got everyone’s taste buds in a tizzy. The homemade angel hair pasta with flakes of crab meat is tossed in a Calabrian chili infused oil sauce, and sprinkled with lemon breadcrumbs and chopped chives. The spicy, mildly fruity taste and aroma of the Italian peppers balance the salinity of the shellfish, which is brightened with the acidic crunchy toppings. The dishes at Proof are meant to be shared, but trust us, you’re going to want to order your own.

Sometimes though, if you are looking for that one bowl of pasta, you gotta do that “Italian” thing. Scott Conant, sound familiar? He’s internationally renowned for his haute Italian fare, but you might know him as the recurrent judge in Food Network’s Chopped that always has a snarky critique to make a la Simon Cowell. The guy is actually quite unpretentious and thoughtful, very much like his cooking. He’s got the nation hooked onto his crack-like $24 spaghetti in a velvet tomato and basil pomodoro sauce found in the Scarpetta menu, which some of the most revered critics in the world acclaim for it’s sheer simple brilliance, that is so dedicated, it’s almost impossible to recreate. But our new favorite is found at his recently opened, more casual second Miami outpost in Turnberry Isle — Corsair. At Corsair, he merges what he call “American and Mediterranean” farm house cooking, using more rustic, seasonal ingredients. Contrary to the delicate mound of spaghetti found at the finer sister restaurant, the taglioni is surprisingly savory, in that offal musty kind of way. The crisped kale and bitter pea shoots add a crunchy texture to the creamy noodles and the flash seared glands, and brighten and balance the dish in a surprising finish.

We’re definitely in a Mediterranean kick these days. We’ve upped the ante from your typical Greek staples and opened the seas to a world that expands beyond olive oil and feta, into the more exotic Middle Eastern realms of saffron and za’tar. This is why Cleo was a welcomed addition to the Collins humdrum of tourist traps. The menu is packed with brazen, bright and colorful dishes, but there’s one familiar dish that reminded yours truly of her Spanish childhood. This clam and noodle bake is styled after the traditional Valencian dish cooked like a paella but with short noodles, fideuà. The noodles are toasted before drowned into a white wine deglazed sofrito, which steams the clams open, softening the briny bivalves with a fruity crisp aroma. It gets better, once arranged in a typical ceramic bowl, he douses it with saffron aioli. 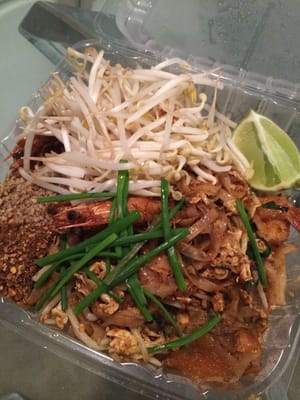 Enough with the fancy. Noodles, after all, are supposed to be an easy, comforting affair. And very few dishes in the world satiate that need like a good order of pad thai. Now the great thing about pad thai is that you can pretty much get a solid deal at any hole-in-the wall or mom-and-pop stop in any city, but we do have our favorites. Newcomer Cake Thai has officially dethroned Coconut Grove convenience store favorite Asian Thai Kitchen with a pad thai dish that will leave you senseless — especially if you order it very spicy. Chef Phuket “Cake” Thongsodchareondee hails from Thailand, and in the midst of transferring between two of the most prestigious Asian restaurants in the city, he decided instead to pay homage to the traditional street food of his culture. He turned an old abandoned take-out shop into your new favorite take-out and delivery shop. What we love about his pad thai dish is the fact that he leaves the grilled savory and juicy prawn heads atop the mound of peanut and bean sprout heaven. Keep their number on speed dial.